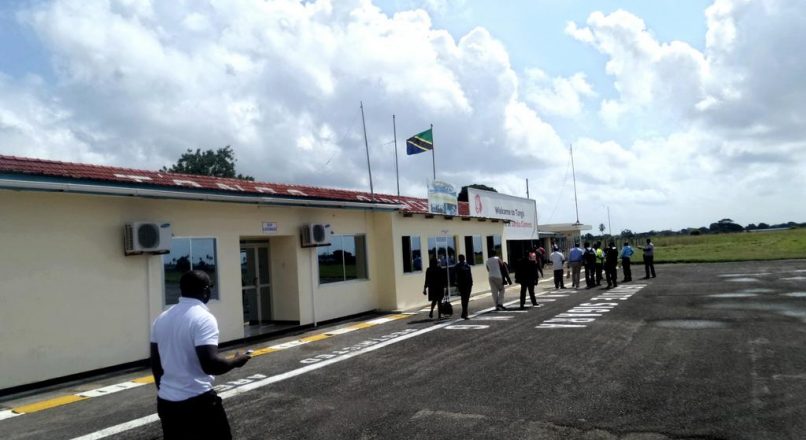 Tanga Airport is a small domestic airport in northeastern Tanzania serving the city of Tanga and the surrounding Tanga Region. It is 3 kilometres west of the city, off the A14 trunk road. The airport has scheduled flights to Arusha, Dar es Salaam and the Zanzibar Archipelago islands of Unguja and Pemba.

The longest flight from Tanga TGT is a 179 mile (288 km) non-stop route to Kilimanjaro JRO. This direct flight takes around 1 hour and 5 minutes and is operated by Coastal Aviation.

Only one airline is flying from and to Tanga, which is Coastal Aviation.

Below you can find a list of the most popular destinations from Tanga, based on the number of scheduled flights for this month.

Bordered by Kenya’s Kilimanjaro region in the north and the Indian Ocean in the east, Tanga is one of Tanzania’s last undiscovered regions. It’s untouched by mass tourism, which means that visitors are guaranteed biodiverse landscapes and authentic interactions with local residents.

Travel along the coast and you’ll discover the footprint-free shores of Sange Beach and Ushongo Beach, which stretch beyond the horizon. There are also smaller, sheltered bays and lagoons (such as Kwale Bay and Manza Bay) fringed with untouched coral reefs. Several islands lie just offshore, covered with pristine forest and speckled with ancient ruins and lonely lighthouses.

Head inland and you’ll reach the Usambara Mountains, which soar to 2,000 metres above sea level and are carpeted in lush rainforest. The mountains are part of the Eastern Arc Mountains biodiversity hotspot thanks to a wide variety of native flora and fauna, including the colourful African violets.

There are plenty of ways to explore Tanga’s great outdoors. Go kayaking or snorkelling off one of the pristine beaches. Hire a guide to take you hiking through the mountains or take a private safari in one of the region’s off-the-beaten-track national parks, Saadani and Mkomazi, where you’ll spot lions, buffaloes and elephants.

Tanga also has a unique cultural heritage and rich history. It’s a melting pot of Arabian, Indian and African culture, populated by different tribes such as the Maasai and the Wambugu. Visit the Maasai settlements in Handeni and Korowgwe to learn more about the inhabitants’ traditional way of life. Head to the capital, Tanga city, to learn more about the region’s colonial heritage.