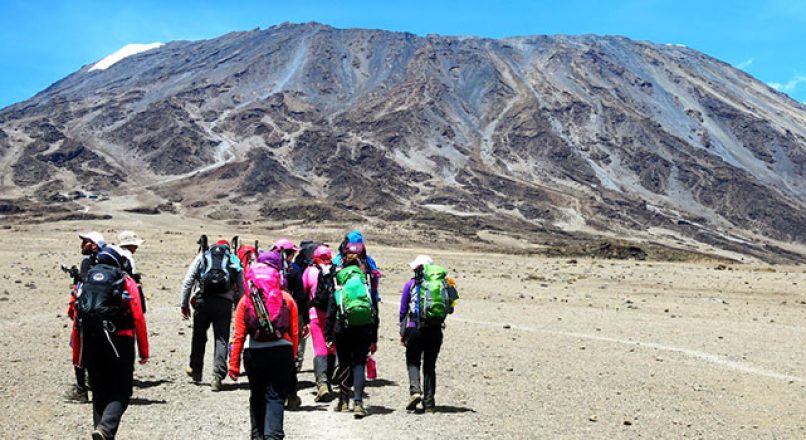 With its gentle gradient and unspoiled remoteness, the Rongai Route is the only trail that summits Mount Kilimanjaro from the north, near the Kenyan border. This beautiful small group Kilimanjaro guided climb through farmlands, forest, and alpine moorlands is one of the lowest traffic routes on Kili and perfect for those looking to ascend the mighty Roof of Africa without hassle of crowds and with the added luxuries of dedicated guides, cooks, and porters.

During the climb, trekkers will stay two nights in comfortable Arusha lodgings and five nights in full-service alpine camping areas in three-man tents with private toilet tents. A large communal tent allows for dining and socialization during days of leisurely acclimatization and comes with lightweight tables, chairs, and all cutleries. The trek is fully supported with spacious guest tents, mattresses, and pillows and catered to by dedicated mountain guides, local representatives, cooks, and porters.

The Rongai Route up Mount Kilimanjaro begins on the Eastern side of the mountain along the base of Mawenzi. Even before one crosses into the national park boundary, these foothills give way to a lush alpine forest where elusive populations of elephant, leopard, buffalo, the endangered Abbot’s duiker, and other wildlife can sometimes be seen.

Birdlife is prolific along the Rongai Route, as are the colobus monkeys—a unique highlight of this particular climb. Ascending via Gillman’s Point to Uhuru Peak, the moorlands of giant heather and lobelias transform into a surreal alpine desert of moss and lichen. The final vestige of vegetation eventually gives way to a winter wonderland of glacial ice and snow as the summit approaches. Views over the Mwaenzi and Kibo saddle, close vantages of Mawenzi, the Kibo Crater, glaciers, and most importantly, the Roof of Africa can be expected on every unforgettable climb.

The seven-day climb along the Rongai Route allows for an extra day of acclimatization under the spires of Mawenzi Tarn before the last arduous ascent, which promises incomparable sunrise vistas over the East African plains. Upon reaching the summit, climbers will descend via the Marangu route, allowing them to experience Mount Kilimanjaro from both spectacular sides. Book your Kilimanjaro guided climb today!

Kilimanjaro rears to almost 6000 meters – just short of 105 meters. On a well-planned trek, 80% will summit. On a rushed one, less than 40% make the grade. The oft-repeated advice, “Pole, pole”, pronounced, “polay, polay”, is Kiswahili for “slowly, slowly”. Go unhurried and enjoy the novelty of the adventure and the wonderful scenery. Don’t waste a moment of this amazing top-of-the-world wilderness experience. Take your time, drink it in deeply and treasure your Tanzanian mountainous vacation achievement for a lifetime.