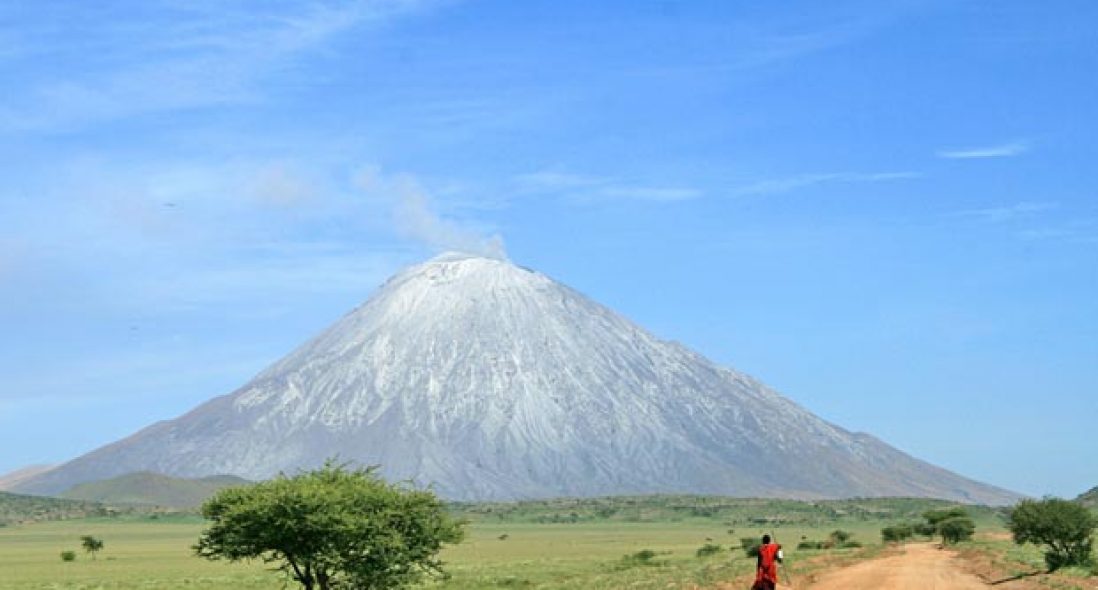 East Africa’s only active volcano, Ol Doinyo Lengai, is situated south of Lake Natron. In the Maasai the name means the sacred Mountain of God. Mount Lengai is ,878meters high and it has explosive eruptions every twenty to forty years. The last bigger eruption was in 1966, with some smaller ones in 1983, 1933 and 2007.

It is located in northern Tanzania lying just south of Lake Natron in the Rift Valley, in the heart of Maasai country, and locally regarded as a sacred mountain. Looking north from it’s summit crater, the hot barren salt flats of Lake Natron stretch into the distance. To the south stretch the crater Highlands and the Ngorongoro Game Reserve. The eastern horizons dominated by Kilimanjaro and to the west the forested escarpments and hills comprising the western slopes of the Rift Valley. Every seven years Lengai erupts and plumes of smoke billow out of the crater.

The ascent of Oldoinyo Lengai is demanding on account of the day time heat, lack of water, steep and unsuitable slopes of ash and crumbly rocks and considerable height gain. Normally you can start ascending to summit early in the morning and reach to summit at sunrise. Short and a warm jacket are suitable for ascent, also long trousers are good as the summit before dawn can be cold. Access route from the North West allows an early descent to be made from the summit in the morning shadow. One of the very challenging Mountain to climb.

Unlike others two highest Mountains, Lengai takes about six to seven hours to the summit crater. Also the Mountain is an ideal place for a working safari escort by the Maasai guides with weapons tourist can sight wild animals like olive baboon, velvet, monitor lizard, hyenas, lion, leopard, jackal, Grant’s gazelle, impala and zebra. The nearby are the Maasai BOMAS that gives you a chance to interact with the indigenous learn their cultures, taboos and traditional. The Mountain frequently does minor eruptions and form cone like structures to its crater base.

The natrocarbonatite lava looks like fluid black oil and it turns white when in contact with objects full of moisture. This whitening happens almost immediately when raining.The mountain has two summit craters. The southern one is inactive and filled with volcanic ash. The active one is the northern summit crater, with a depth of over 200 meters. Mount Lengai can be climbed up to the peak and sometimes also all the way down to the crater, almost to the brim of the molten lava flows.

Climbs are mostly organized after midnight to reach the summit in the sunrise.Although the route is hard because of the heat ( 40°C) and hikers are advised to be extremely cautious, the views from Mount Lengai are astonishing. In the north Lake Natron is visible, in the west the Great Rift Valley, and the eastern part offers majestic views of Mount Kilimanjaro.