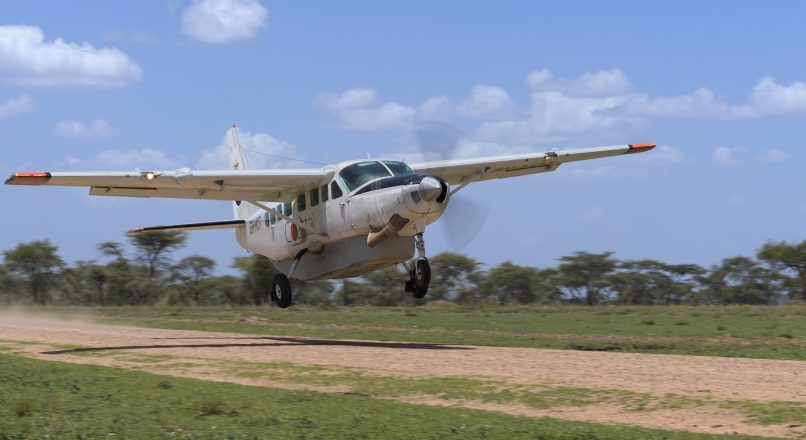 Mafia Airport is an airport on Mafia Island in the Pwani Region of Tanzania. The island is in the Indian Ocean, 17 kilometres off the Tanzanian coast. In 2013 the landing strip at Mafia Airport was rehabilitated using grant funds provided by the United States government through the Millennium Challenge Corporation.

At present, there is one domestic flight from Mafia Island.

The only flight from Mafia Island MFA is a 79 mile (127 km) non-stop route to Dar es Salaam DAR, which takes around 30 minutes.

In total there are 2 airlines flying from and to Mafia Island. Those carriers are:

Below you can find a list of the most popular destinations from Mafia Island, based on the number of scheduled flights for this month.

There are two alternative airports to Mafia Island (MFA) within a range of 125 miles (200 km), which are Dar es Salaam (DAR) and Zanzibar (ZNZ).

Mafia Island is the largest of a small archipelago of islands and atolls and is truly a paradise in the Indian Ocean. It is the southern most of three islands (Pemba & Zanzibar) located off the coast of Tanzania. 25kms from the mainland and 130kms from Dar es Salaam, it is reachable by light aircraft in 35 minutes or 45 minutes from Zanzibar and the Selous Game Reserve. The resident population of 46,000 are mainly fishermen or smallholder farmers that grow coconut, paw-paw, rice and cassava.

The islanders are friendly and welcoming and the atmosphere relaxed and laid-back. The dominant religion is moderate Islam and both christians and muslims live in peace and harmony. The air and sea temperatures remain warm all year round with the rainy season between April to June. Today Mafia Island is known as a wild and beautiful Indian Ocean tropical island that is famous for deep sea fishing and scuba diving.

Aquatic life is abundant and the coral gardens are pristine due to the protection of the Mafia Island Marine Park. The park is located between the Rufiji River delta to the west and the open Indian Ocean to the east. The dual influences of the river and the sea have combined to create a rich and exceptional biodiversity with unique landscapes under the sea and on dry land. It is a unique and perfect destination as part of a safari package or simply a place to unwind and get away from the daily, modern and busy world.