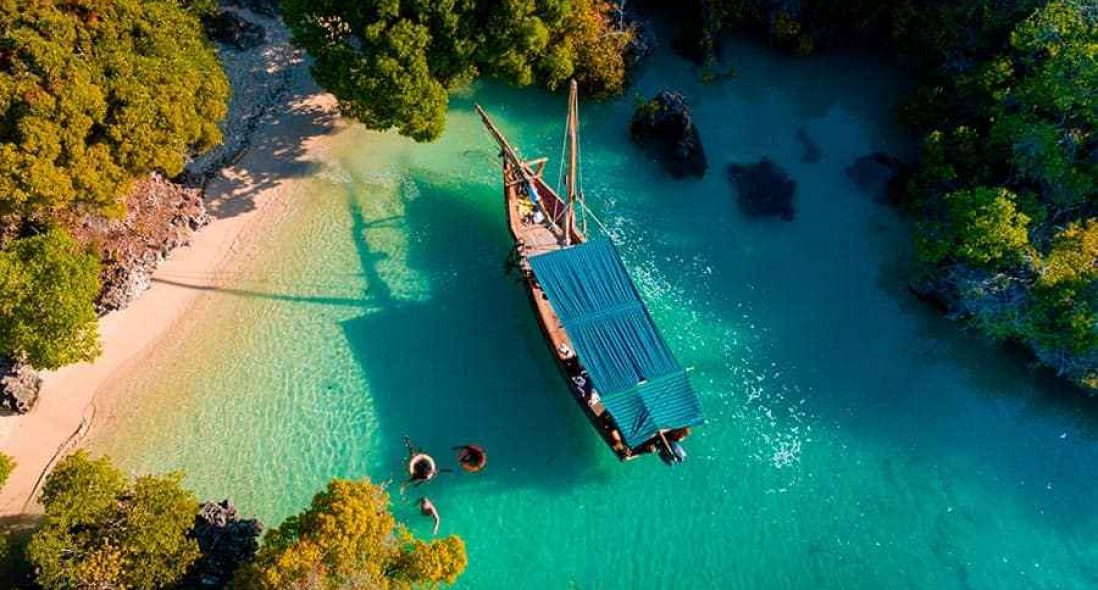 Literally just south of Dar es Salaam are a number of beaches that seem a world away from the hectic city life of ‘Dar’. Our top tip here has always been Ras Kutani, a wonderful stretch of beach that is home to a couple of hotels, one of which is our mainland coast favourite – Ras Kutani. Further south, 600 km of coastline stretches to Rovuma River on the Mozambique border. Kilwa Masoko, Lindi, Mikindani and Mtwara may not offer as many creature comforts as the majority of Western tourists would like, but this area remains untouched and steeped in history, an interesting region for true explorers.

North of Dar, the huge old trading port of Bagamoyo has faded somewhat yet still forms an integral part of East Africa’s history. Further north, beach meets bush at Saadani, the only safari park of its kind on the continent. Even further north, running up to the Kenyan border, travellers will find a more developed region than the area south of Dar, with the majority of visitors to this area focusing on the area around Tanga and the sleepy fishing villages surrounding Pangani and especially Ushongo – our favourite beach on the mainland coast after Ras Kutani.

Saadani National Park is the only park in East Africa that borders the Indian Ocean. It is a great location to see game in the verdant mangrove forests and to relax on the beach’s golden sands, soaking up the evening sun.

Ras Kutani Beachis located on the mainland coast about 30km south of Dar es Salaam in Tanzania. Situated on a hillside between a freshwater lagoon and the ocean, this Tanzania beach hotel on the Swahili Coast.

Zanzibar is a Tropical archipelago found just a few miles from Tanzania mainland. Now, Zanzibar is becoming a most popular destination for tourists from different countries around the world.  Some travelers are coming from Tanzania Mainland after having their long Safaris, and others are coming with direct flights to Zanzibar from their countries. All these travelers have something in common, they all looking for the best beaches to spend their vacation in Zanzibar. In this guide we have listed best beaches you can choose to stay or go to visit.

Zanzibar has plenty of places to visit and activities to enjoy, as you can see just with a fast check of our blog. But let’s be clear: if there is something you will do here for sure, it is a day on the beach. Or several! Why? Easy: because here you will find some of the best beaches around the world. White sands. Warm water. Breath-taking landscapes.

Check out the top 8 beaches around Zanzibar

Bwejuu beach is located western part of Unguja Island (Zanzibar), between Michamvi beach on the north and Paje beach on South. About 52.9 km from Zanzibar Airport and 52.0 km from Stone Town (City).

Michamvi beach village is found on the Michamvi peninsula East Coast of Zanzibar (Unguja Island). About 64.6 km from Zanzibar Airport and 63.7 km from Stone Town. Here is where is where the famous The Rock Restaurant is found

Nungwi beach is located on the North part of Zanzibar (Unguja Island). It is about 67.4 km from Zanzibar Airport and 62.9 km from Stone Town. It has been listed among the best beaches in Africa by CNN Travel for the year 2017.

This beach is located on the North West part of Zanzibar (Unguja Island). About 66.2 km from Zanzibar Airport and 61.7 km from Stone town. Kendwa beach is considered as the best beach in Zanzibar Islands and Tanzania as a whole.

Kizimkazi beach is located on the Southern part of Zanzibar, at Kizimkazi Fishers village. Kizimkazi beach is a famous beach in Zanzibar for swimming with Dolphins, so many tourists book their boat trips to swim with the wild dolphins and snorkeling.

This place is famous for snorkeling. Fishing at this place is forbidden, that is why you can see different beautiful sea creatures like Green turtles, Indo-pacific sergeant, Titan triggerfish, Twobar anemonefish, Moorish Idol and so on.

Pongwe beach is located next to Uroa beach before you arrive at Kiwengwa beach. It looks similar to Uroa beach, its village’s occupations are the same; they are small-scale fishers, they use traditional ways of fishing. .

This beach is located on the South East coast of Zanzibar Island. Located between Bwejuu and Jambiani. About 49.8 km from Zanzibar Airport and 49.0 km from Stone Town.Paje beach is considered as the best beach for Kiting in Zanzibar Islands.

When you are in the city, you want to ensure you get in a great holiday break. Tanzania has an amazing group of beaches and places that look like they are going to be out of a picture book. This is a place where people from all over the world flock and enjoy the beauty of the beaches. There are some in the city though and in the surrounding areas that will ensure that your breath is taken away.

There are amazing stretches of coastline and beaches that are going to guarantee some amazing experiences. Here are the 10 best beaches in the city of Dar es Salaam that you need to know about and ensure you never miss.

This is located outside of the city around 20km north of the center of the city. This is along Bagamoyo Road. The beach is untouched and is a great place to enjoy the beauty. It is a place that is perfect for diving as well. There are many other art galleries as well that are around the beach for a luxurious accommodation if needed. This is one of the most different and unusual beaches in the area .

This is a place that is always bursting with life and that is a great place to enjoy the beauty of life by the ocean, Coco beach is located along Toure drive and in the tranquil neighbourhood of Oyster bay - Dar es Salaam . The sand is completely clean and it is on the east side of the Msasani peninsula and is a great place for tourists. It is also a great place for night life and for eating out wth family or friends

This is a beach that is also known as Kingamboni that is a great choice from many of the local people. It is gorgeous and has a white sand beach as well as clear water. This is a place that is perfect for swimming and also has many different hotels and places for you to enjoy the beauty of the beach. This beach is off of Kigaboni Road. If you love live music this is a great place to head to.

The name Mikadi comes from the tree that lives along the entire coastline of Tanzania. This is a place that you want to enjoy a long weekend. There is a lodge as well that is perfect on the beach. In addition to that, there are amazing places to go with a swimming pool, a bar, and one of the best burger places you will every try in your life. This beach is well known for its mix of amazing experiences.

This is a mainland beach that is often forgotten. This one is amazing and the local people know it. Both people from the area expats are aware of the beauty of the location and people come here as a weekend getaway. This is a location that has tons of hotels that are all around the area. Some of the most well known include Amani Beach Cottage and Ras Kutani.

This is in the top of the city and is a piece of paradise as you navigate up Bagamoyo Road. The beach has a huge choice of hotels and lodges. There are all kinds of options as well for water sports when you are ready. There is also a local fishing village ensuring fresh seafood anytime. This is a surfer’s paradise year-round and it is possible to get the best waves as well as a comfortable atmosphere. ‍