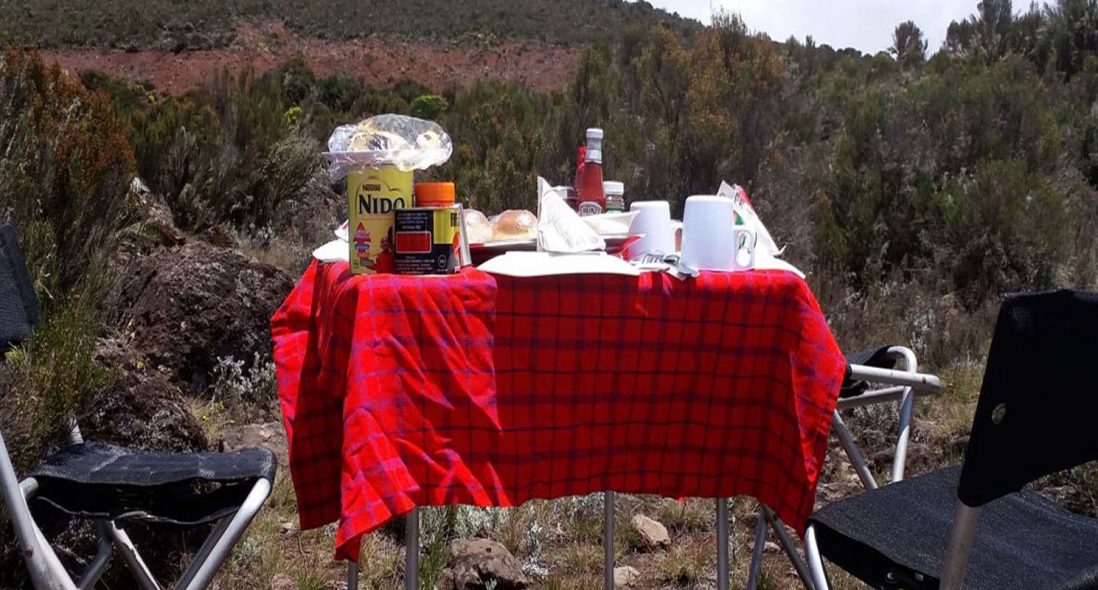 Staying hydrated and well-fed amid your climb is absolutely vital, especially when conditions are such that you might not want to eat or drink as much as you should. But it needs to consider about the Kilimanjaro Food & Water for a great health during Mount Kilimanjaro Climbing .

Food Menu on Mount Kilimanjaro is an important issue to discuss before climbing mount Kilimanjaro. Kilimanjaro Climbs requires healthy food menu ranging from Proteins, Carbohydrates and Fats for both clients and our entire Kilimanjaro trekking crew.

During your Kilimanjaro hike, our professional cooks will prepare three hot meals on daily basis. i.e.  breakfast, lunch and dinner.

Food Menu on Mount Kilimanjaro always is cooked with fresh seasonal yields. All fruits, vegetables, sea food, beef and chicken are purchased from the local markets in Moshi.  For all treks of over 5 days in length, we have re-supplied of fresh food to the camp/hut for our use.

Mount Kilimanjaro is the highest free standing mountain in the world, rising 5,882 metres or 19,298 ft from it/s base. It is a volcano with three volcanic cones, Kibo, Mawenzi, and Shira. Kibo’s highest peak (Uhuru Peak) rises 5,895 metres or 19,341 ft above sea level.

Mount Kilimanjaro is a member of the famous “Seven Summits“, the highest peaks on each of the seven continents. Just 200 miles (325 Km) from the equator, Kilimanjaro’s glistening peak of snow and ice looms high above the African Great Rift Valley.

Kilimanjaro is composed of three volcanic cones: Kibo The highest point being Uhuru or Kaiser Spitze – (19,340 feet), Mawenzi Looks like Mt. Doom of Mordor – also known as Hans Meyer Peak – (16,893 feet ) and Shira – the oldest of the three is actually not particularly noticeable as a volcanic cone because it collapsed and was filled in by Kibo’s lava flows, creating the stunning Shira Plateau.

Where to Stay before and after your Kilimanjaro Climb

The Stella Maris which is our standard hotel is the right choice for visitors since it is conveniently located on the main road from Kilimanjaro International Airport before reaching the safari capital of Moshi. Just 25 minutes from the airport, the Stella Maris is situated in the peaceful village of Mailisita, on the outskirts of Moshi itself.

Situated on the foothills of Mount Kilimanjaro, Parkview Inn offers unmatched levels of quality and comfort. With a prime location in central Moshi, there is no better place to prepare yourself to climb Kilimanjaro. The spectacular view of Kilimanjaro is delightfully complemented by our poolside patio and professional service.

KEYS is a modern hotel, with an African touch which is dedicated to maintaining up to standard international hotel services. The Hotel is situated at a Prime location along the Uru Road – Moshi, a walking distance to Moshi town centre. In a clear sky, you can view the beautiful snowcap of Mount Kilimanjaro from the premise.

All Kilimanjaro climbing route except Marangu route are camping route of which we must supply sleeping and dining tents. We have very good and high-quality four-season tents. All our tents are brand new in every season to make sure that our clients stay dry and enjoy every step during the climb. For those choosing Marangu route you will be staying at huts/Bandas.

On every public campsite and every half day of the day has public hole toilets. These toilets are not very clean because are used by so many people, therefore we at Popote Africa Adventures Ltd provide portable flushable toilet. We provide one toilet to be shared by 4 people. This mean if the group is more than 4 people, more than one portable will be supplied to meet the demand of the group.